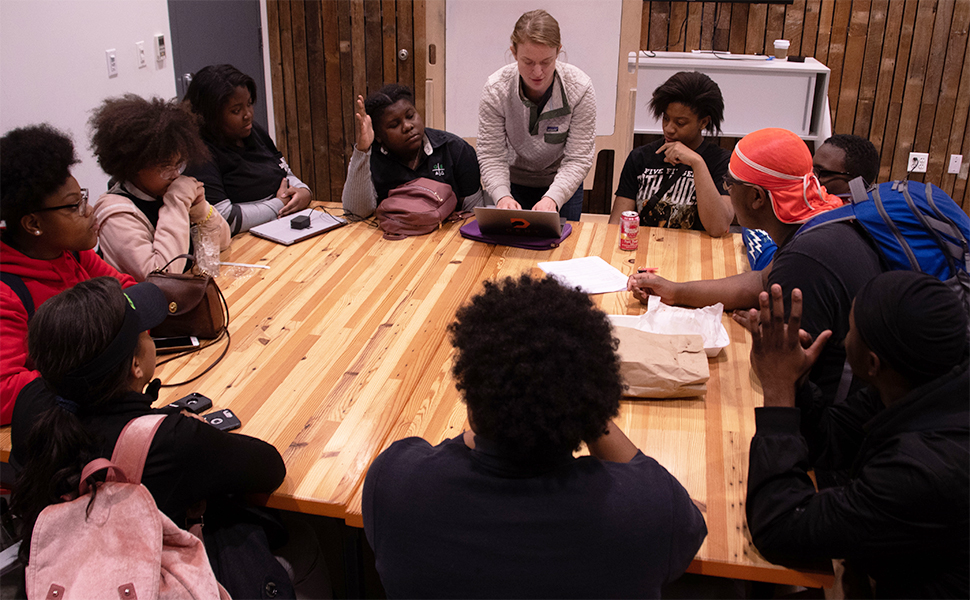 Over the past two years, IYF has transformed its in-person life skills curriculum into a multilingual, digital game-based work readiness course designed to be used by young people on their mobile phones. We call it Passport to Success (PTS) Traveler.

While IYF has created e-learning courses before, this ambitious project required a total re-think of how the design, development, and distribution would take place. To get there, our team had to create a new blueprint—one that would ensure our effort would end with over 1 million young people having been impacted by this work.

This new blueprint started with the Principles for Digital Development, which offer guidance on how to do responsible, effective, impactful digital development. To be clear, the Principles are not new. In fact, the journey toward their creation began over twenty years ago when a group of funders and multilaterals came together to discuss common digital development implementation challenges. They have since evolved in number, scope and application, and an ecosystem of evaluation and investment tools has emerged to support their integration into development projects.

While all nine Principles are important and useful, the IYF team leaned most heavily into Principles 1 and 3—Design for Scale, and Design with the User, respectively. More to the point, we found that designing for scale (in our case, serving 1 million young people) was best achieved by merging our expertise in positive youth development with the tenets of user-centered design.

First, drawing on the tenets of Principle 3 (Design for Scale) we built a distribution model and established regional targets to conceptualize how we might hit our 1 million target. However, we quickly realized that to reach this milestone, we would need to turn to our strengths: authentic youth engagement through program design and delivery.

At that point, Principle 1 (Design with the User) became the beating heart of this initiative. From paper prototypes to rapid social media polls on concept art, at each stage of the process young people were in the driver’s seat to lead decision-making. Throughout the pre-design, design, development, alpha reviews and beta reviews, young people were at the forefront of the process.

When it came time to name the course, the project team shared a slate of possible options to IYF staff and executives, while simultaneously conducting a parallel survey via Facebook and Instagram with the actual young people in the core markets where the course would launch. The result? The C-suite’s top choice was at the bottom of the youth’s list, and vice versa. The young people spoke, so “Passport to Success Traveler” won the day.

After PTS Traveler launched in early 2020, IYF deployed two validated measurement instruments to capture the user’s progress. These evaluations revealed that users who completed all units of Traveler saw medium to large gains in multiple soft skills domains—like teamwork, communication, cultural understanding, and problem solving—which are directly linked to career-readiness. This, paired with youth perception data in the high 90%s, indicates that PTS Traveler’s user-centric approach was a success. In the last few months, we’ve received further validation that our approach worked. We are proud to have received two awards for PTS Traveler—mEducation Alliance’s EdTech Champion Award in the Youth & Workforce category and the Brandon Hall Group’s Gold Award for Best Advance in Social Impact Innovation (Future of Work category).

While this embrace of Principle 1 was great for the resulting technology solution, there was another, related benefit. One that was more important in some ways than the technology design. Having a voice, having an impact on developing a course that would impact others like them on the other side of the globe, really mattered to the young people IYF engaged. Designing with the user meant making them a part of a conversation, and because of the nature of the project, it connected them—invisibly, but in a palpable way—to peers they had never met.

One focus group participant summed it up this way: “To participate in this was such a cool opportunity—to know that I’m helping work towards something that’s helping young people who are in my shoes but all over the world.”

A broad embracing of these Principles will mean more responsible, effective, relevant, impactful technology for people around the world. It is our hope that we can continue to push our own boundaries in embracing these Principles—and the importance of meaningful youth engagement—and that our peer organizations will keep doing so, as well.

PTS Traveler was created with generous support from the PepsiCo Foundation, the Cornerstone OnDemand Foundation, and the Estée Lauder Companies Charitable Foundation. To bring PTS Traveler to life, IYF partnered with a team of innovative game designers, programmers, and artists at GameTheory Co. and Sundae Month.