On weekday afternoons, 20 underserved youth head to the Volvo Trucks facility, located on the outskirts of Buenos Aires, Argentina, to be trained in life and technical skills through what is known as a Pescar Center. Volvo hosts one of 22 such centers across the nation. For corporate social responsibility managers, the Pescar model is appealing for a number of reasons, not the least of which is the opportunity it offers to engage employees in the hands-on training of disadvantaged youth, while contributing to local communities.

In English, pescar means to fish. The origins of the ‘fishing centers’ concept can be traced to Brazil, where in 1976 businessman Geraldo Linck opened the doors of his company to train disadvantaged youth to learn a profession. Linck was inspired by the adage, “Give a man a fish and feed him for a day; teach a man to fish and you feed him for a lifetime.” Over time, his efforts captured the attention of other business leaders and in 1988 Projeto Pescar was born. Today, the organization has spawned more than 90 Pescar Centers in Brazil, with the concept adapted in Argentina, Paraguay, Peru, and Angola.

The model was first brought to Argentina 15 years ago, following a visit by businessman Edgardo Palmero to a Pescar Center in Brazil. Palmero was immediately drawn to Pescar’s systematic methodology for training low-income youth—within a corporate environment—to develop a life project and get their first job. After engaging Silvia Rueda de Uranga and other committed partners, the group launched two Pescar Centers with the goal of engaging socially-responsible companies in efforts to combat high youth unemployment.

Today, Uranga heads Fundación Pescar, which manages a growing portfolio of youth employability programs, including Pescar Centers established in seven provinces across Argentina. Among those companies to have adopted the model are Accenture, Aeropuertos Argetina 2000, Coca-Cola, Dow, Makro, Santander Río, Samsung, and Toyota.

What makes the Pescar Centers unique is not just their success at training disadvantaged youth for the job market, but their ability to bridge the divide between youth growing up in marginalized communities and the corporate world. In a nation where youth unemployment and income inequality are on the rise, the centers offer a potent message of inclusion.

“This program reflects what we think could be the future for Argentine society,” says Florencia Renda, RSE Project Manager at Banco Santander Río, which has hosted a center for nine years. “We want people to feel not only that they can integrate, but it’s going to be much better for our relationships and society as a whole.”

How the Model Works

Santander Río first opened a Pescar Center at its headquarters in Buenos Aires in 2008. “We started looking for the people that knew the most about training youth,” says Renda. “Pescar was the best option in the foundation market.”

Most of the youth at the Santander Río center live in villas, or shanty towns, on the city’s outskirts. Each is in their last year at one of four technical high schools. Acceptance to the program is highly competitive; up to 200 youth often apply for 20 spots. A rigorous screening process identifies economically disadvantaged youth who possess the motivation and drive to succeed in the program. While the training was initially delivered over nine months, Santander Río recently negotiated with Pescar to condense the program to four and a half months to increase the number of youth reached annually to 40.

The youth come to the bank’s offices overlooking the Plaza de Mayo on Monday through Friday from 2:00-5:30 p.m. There, they eat lunch in the employee cafeteria before participating in afternoon training exercises. Their lunch and transportation fees are paid for by Santander Río as part of its agreement with Pescar. “For many of these youth, their main meal is at the center,” says Uranga in defense of the requirement. “A young person that’s hungry cannot study.”

“They’re amazed when they first get here,” says Florencia Cocorullo, the Pescar staff member, or orientator, assigned to deliver training at the Bank and ensure goals are met. The Bank, too, is required to dedicate a staff member, or articulator, who champions the program internally and ensures the necessary resources (e.g., meals, uniforms, and technical trainers) are made available. A third role is carried out by the Pescar Coordinator, who supervises each of the orientators and ensures quality across the foundation’s current network of 22 centers in Argentina. See Figure 1.

Cocorullo and the other orientators, who have backgrounds in education, psychology, and social work, follow a set outline of course modules as prescribed by Pescar. Each personalizes the curriculum with interactive exercises designed to actively engage youth. Beyond their training function, orientators serve as case managers—tracking each participant’s progress and offering support when needed, for example, in navigating challenges at home. “What’s rich about the program is the human component,” stresses Director General Uranga.

A young person’s journey through a Pescar Center begins with an analysis of their strengths and weaknesses, followed by goal-setting as each develops their life project. (See Figure 2.) Nurturing the self-awareness and confidence of youth is key. “Through the training, they get to know themselves,” says Cocorullo, adding that sometimes it can take months for participants to recognize and own their strengths. “Their family context can erode their self-esteem,” she says. “Interacting with employees helps boost their confidence.”

In addition to life skills instruction, participants at Santander Río receive technical training from Bank staff in customer service, sales, finance, and other banking-related activities. Staff volunteers also deliver lectures based on their areas of expertise. An HR representative might offer advice on what to expect during an interview, while a financial manager might share tips on creating a budget or saving money. 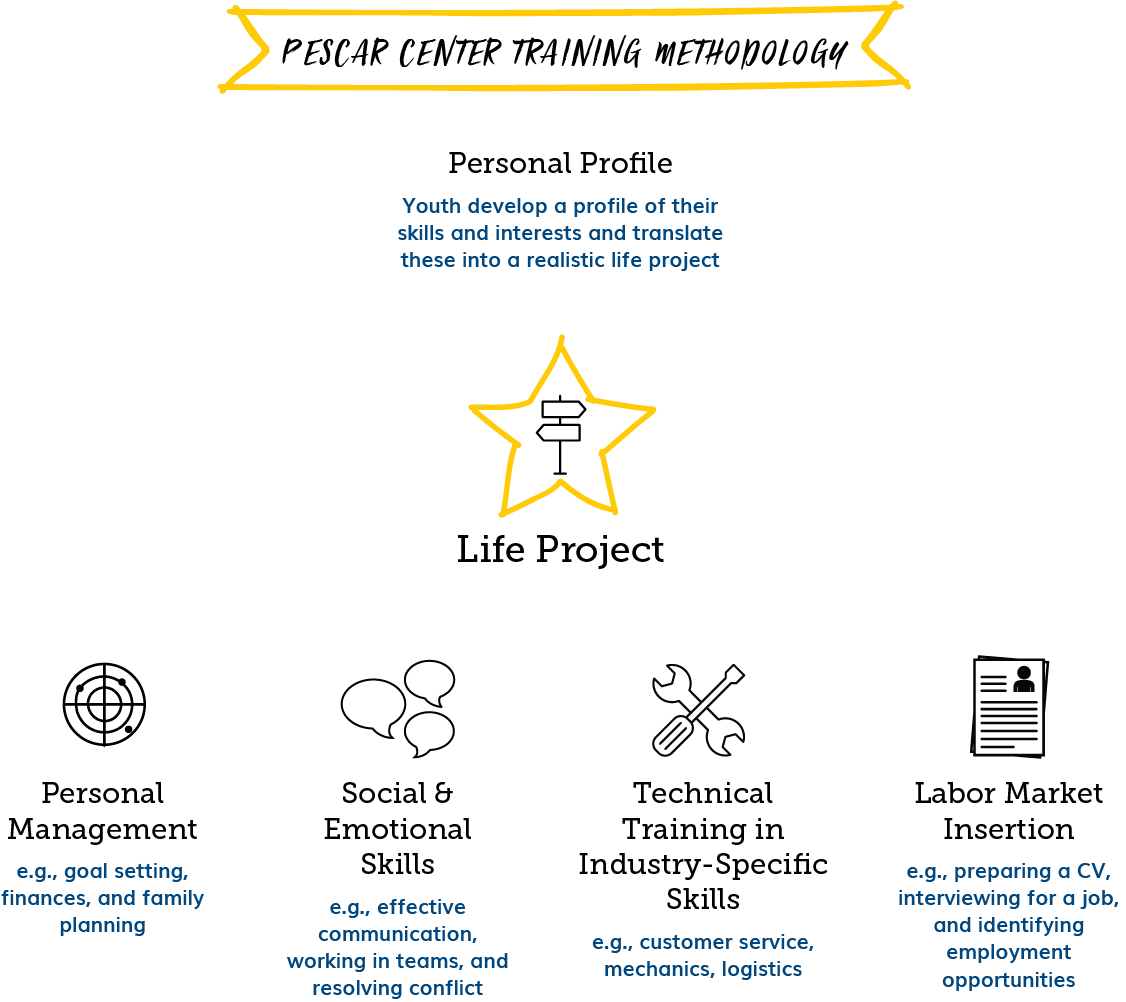 “The difference you see between the first and last day of the center is huge,” says Renda. “When [the youth] first get here, they’re all shy. When it’s near the middle you start seeing changes,” she adds, as the youth adjust to their surroundings and learn what’s expected of them.

When they finish the program, participants attend a formal graduation and receive a certificate of completion from both the bank and Universidad del Salvador, through which the Pescar training is certified. Some secure jobs at Santander Río; while others are referred to other service-oriented companies. According to Renda, “Most get a job within the next two months, because they’re really well-prepared.”

A young person’s journey with Pescar doesn’t end with graduation. Each receives follow-up support from a dedicated staff member for two years, with check-ins scheduled every four months. Staff track a participant’s progress from the moment they enter the program through Pescar’s online database, making it possible to access and update information quickly and efficiently.

A Win-Win for Youth, Companies, and Communities

When Volvo Trucks first launched its Pescar Center in 2015, it took a while for company staff to fully embrace the concept. “We told employees they could share anything, maybe just a life experience or some Excel classes,” says Valère Lourme, Head of Marketing and Communications for the company in Argentina. “At the beginning, they were a little bit doubting. Now they talk a lot and exchange with the kids.”

David Albornoz, who graduated from the program, recalls being greeted on the first day with balloons and an introduction by the CEO. “What I liked best was the environment I found at Volvo,” says Albornoz, now 20. “People were friendly. It was like a family.” His experience in the company’s IT department taught Albornoz that he wanted to be a programmer. After completing short-term jobs elsewhere, he’s now back at Volvo working as an IT assistant, while studying for a technical degree.

“What I liked best was the environment I found at Volvo. People were friendly. It was like a family.”

Albornoz’ experience of feeling accepted and at home is common among Pescar Center graduates. “The program has a great impact on the youth and within the company,” says María José Cesti, who heads up Pescar’s employer outreach. “Employees see the youth when they come and when they leave. They create a bond with them and even exchange phone numbers.”

The program’s impact can also be traced to beneficiaries’ families and communities. On average, Pescar graduates contribute to a 40 percent increase in family income. The youth also serve as role models for their peers. The program’s emphasis on active citizenship encourages youth to carry out service projects and share what they learn through the center with classmates at school—whether it’s how to write a CV or conduct a job search.

For Lourme and other Pescar partners, the program offers a unique form of corporate citizenship that can be internalized within the company, while equipping youth with much-needed skills for the marketplace. While participating companies are under no obligation to hire the youth they train, many do. “We have nice facilities and instructors who know a lot about mechanics and we want to share this,” says Lourme. “If [the youth] are good mechanics, they can help us also. It’s part of the whole chain.”