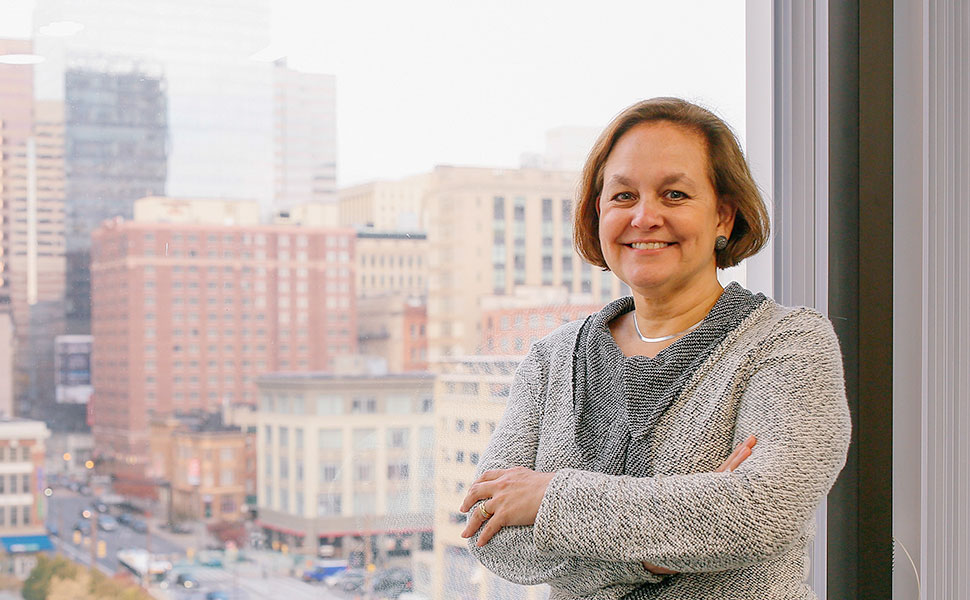 IYF recently hosted Carla Koppell to our Baltimore headquarters to discuss all things diversity, equity, and inclusion. She is currently a Distinguished Fellow at the Georgetown University Institute for Women, Peace and Security and is leading a comprehensive national effort to incorporate attention to diversity, equity, and inclusion in graduate international affairs and public policy education. Amongst other notable appointments in her 25-year career, Carla served as Vice President with the United States Institute for Peace as well as Chief Strategy Officer and Senior Coordinator for Gender Equality and Women’s Empowerment for the U.S. Agency for International Development (USAID).

In conversation, it is easy to see why Koppell has achieved success in international mediation and the advancement of an inclusive development agenda. She is authoritative yet humble; deploys precise anecdotes that indicate both breadth of experience and depth of empathy; acts as an ardent ally, aware of her position and privilege, but not interested in making them the center of a narrative; and communicates complex ideas and processes in ways that are accessible to her audience. I sat down with her for a half-hour to discuss the importance and impact of a diverse workforce, inclusive design and implementation processes, and how an organization knows when it’s progressing in terms of promoting diversity, equity, and inclusion institutionally and programmatically. Her responses have been lightly edited for brevity and clarity.

Gender is just one of many intersecting identities that can lead to marginalization or exclusion in development. Why are so many organizations still emphasizing gender equity and social inclusion (GESI), and not just social inclusion more broadly?

If you look at the history of movements for inclusion, the movement for the inclusion of women and girls advanced earlier than other movements in pushing for a paradigm in global development that serves a wider range of interests. A lot of other movements for inclusion have followed; we saw this at USAID, where we increased the emphasis on gender equality and women’s empowerment and then created similar efforts to advance the focus on people with disabilities, indigenous people, and youth among others. So, I think in some ways, it is born simply of time and the pace at which movements have gelled.

Why is it important to pay attention to issues of diversity and inclusion in international development?

There are trends that indicate we are going to continue to see, and have exacerbated, instability and fragility as a result of fragmentation, marginalization and grievance. Countries are becoming more diverse, and technology is making the felt diversity within countries increase. Diverse stakeholders have more voice and influence, and we need to enable them to feel included, vested, and incorporated into the functioning hierarchies within those societies, or we really are going to see the degradation of social cohesion.

You’re doing a lot of work to promote diversity, equity, and inclusion in international affairs education. What are the programmatic and operational benefits of a more diverse workforce?

If we talk about the field itself, there are many. We know there is research that peace processes are more likely to be successful and durable if you involve a wider range of stakeholders in the negotiation process. We also know that if you have a diverse population of employees, you’re better able to navigate different communities on the ground when you’re trying to deliver benefits to those communities. There’s also very compelling evidence that we are leaving a lot of development potential on the table by not fully engaging all subsets of the population.

As an example, we know that women’s under-empowerment means that development investments are not maximizing their delivery because they are not reaching women as well as they should be. We would get more for our invested dollar if we more successfully reached women and girls. For example, if we’re designing schools and not engaging the male and female parents of schoolchildren, we’re not going to understand how to build those schools in ways that are likely to attract male and female students. I remember there was a story of a school that was built on the other side of the road from a community and they built a tunnel under the road to get to the school. Well, the girls didn’t go to school because the parents didn’t feel it was safe for them to walk through that tunnel. Had there been a more inclusive approach to designing the plan for that school, it would have resulted in the construction of a bridge rather than a tunnel.

Another example relates to the configuration of tents in refugee and displaced persons camps, which tend to get built in rows. What we know is that often women would rather they be arranged with a cul-de-sac at the end, arrayed in a circle so they there are no dead ends and they can cook in the middle. When we don’t engage with our beneficiaries in the design process, we end up with higher rates of harassment and violence. More optimal results are achievable if we engage in inclusive discussions on how to plan camps for the internally displaced and refugee populations.

In virtually every sector, we see the same is true. Inclusive design processes result in simple changes that increase the return on investments for development in a whole range of different sectors.

How do you make the case for the importance of diversity, equity, and inclusion to those who may be unaware or resistant to change?

There are a number of tactics. One is appealing to people on a moral and ethical level. There are many people for whom that is important. It is fundamental to the agenda.

The second is showing them the data. There’s overwhelming data that organizations benefit from having a diverse workforce, whether it’s for-profit institutions that see better returns on investment, or peace processes that see a wider range of issues being brought in; whether it’s non-profits trying to reach different demographic groups within a country, the data shows that it matters in terms of the results that you achieve.

The third is to approach it in terms of the workforce, both the opportunity to broaden the base from which you’re recruiting and then linking it back to the results that you achieve organizationally and the data that supports that equation. I know those interrelate, but I believe them to be discrete and different, and they imply different ways of thinking about moving the needle, if you’re trying to pursue a diversity, equity, and inclusion agenda within an organization.

What does success look like? How does one know when they’ve moved the needle on diversity and inclusion? I’m struck by a distinction you made earlier between rhetorical and concrete progress—what are indicators of concrete progress?

Your indicators have to be anchored in time to some extent. So, rhetoric is OK for a while. That is an important step. Then, you want to move to a place where implementation matches rhetoric. To give a concrete example, this could be that all new proposals reflect a focus on equity and inclusion issues. After that, you want to move to results and have them confirm you are doing a better job of reaching a wider cross-section of the population, consistent with the priorities you set out.

It is unfair, and not appropriate, to say that you’re going to reach everybody all the time. As much as we would like to say that, resources are not infinite. But you do want to do a better job of reaching out to the people you said you wanted to, and who were [targeted for inclusion] with a full cognizance of the population as a whole.

One of the things I’m [increasingly focused] on is the issue of equity. We’ve been focused on inclusion and closing gaps in access and results, but it’s not enough to say you’re going to lift all boats, because if they start at different levels that disparity will remain. It needs to be about gap-closing. That’s what we see as a central challenge of the development agenda, is that we have helped end extreme poverty at a macro-level, but what we’ve missed is that that’s an averaging function which masks the people being left further and further behind. If we continue to use per capita GDP as the only measure, that could continue to go up infinitely and you could still have this underclass that doesn’t move forward at all.