From Idleness to Opportunity in Kenya 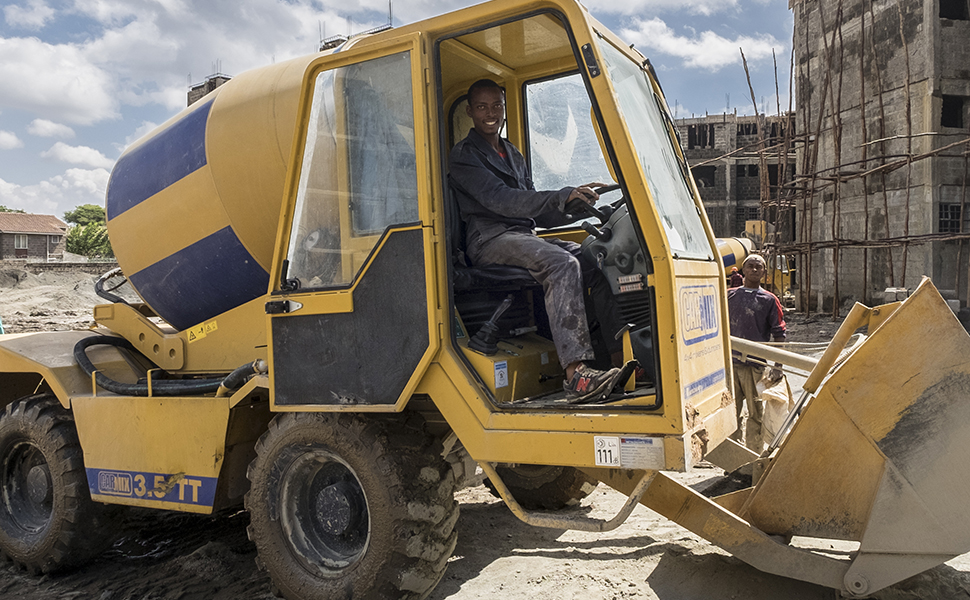 “I had to drop out of secondary school because my aunt, my guardian, could not afford to educate me,” began Joseph Kinyanjui. “I hoped one day I would operate a big machine.” This 22-year-old graduate of the Sport for Kenyan Youth Employment (SKYE) initiative addressed an audience of project partners and construction firms, describing his initial idleness and current success.

For Joseph, the change began when he resumed playing soccer during his free time, through SKYE partner Mathare Youth Sports Association (MYSA). Using soccer as a way to connect with young people and build their skills, SKYE targets disadvantaged young women and men who are out of school, unemployed, and currently living within the Mathare region of Nairobi’s city limits. The initiative is carried out in partnership with Barclays Bank PLC.

Living conditions in Mathare are poor, and employment opportunities are rare; before, Joseph would give rides on his motorcycle to earn income. The resulting idleness among the youth makes them highly susceptible to risky behavior, including drug abuse, says Joseph. “As I operated my motorcycle business, I was meeting a number of youths who were involved in crime, and my aunt feared that I may also get engaged in criminal activities.”

Work readiness is foundational to SKYE and offers participants a positive path forward. One key component is life skills training using IYF’s Passport to Success® curriculum. “PTS greatly contributed to my personal development,” says Joseph. “Now I know the essence of time management, my life is more focused as I live towards achieving the goals I have set, and the financial literacy exposed me to the need to budget and save.”

Partner Arc Skills facilitates the vocational skills training that takes place on an active work site. “I enjoyed training on a real job site and spent all my free time admiring how the big machines operate on a construction site,” Joseph says.

He secured paid work on the site immediately after receiving his SKYE certification. Once he had worked as a level one mason for two weeks, he asked the site manager if he could follow his passion of operating machines. His background in masonry placed him among the best operators of the self-loading concrete mixer machine, because he understands the concrete ingredients and the amounts to mix. His site supervisor has so much trust in his work and confidence in him that Joseph managed to recommend and secure placements for his friends who were in the second SKYE cohort, after him.

Today, Joseph works as a machine operator, he earns a weekly income of 3,500 Kenyan shillings, which exceeds the national average, and of which he saves 2,500 per week. He also feels good that his aunt can sleep without worrying about his whereabouts.

Joseph also has played a significant role in encouraging other youth from Mathare to enroll in SKYE and in mentoring SKYE participants who train in the same site where he is employed. During tea and lunch breaks, he takes the time to encourage and motivate the other youth by sharing how the SKYE project has impacted his life and the need for young people to resist bad influence.

"There is so much peer-to-peer influence among youth, and that’s how most of them engage in crime and drugs. I am proud to have positively influenced the youth in the community where I live as well as the youth who train in Komarock Heights,” says Joseph.

When Joseph addressed the audience at the SKYE project stakeholder’s forum, he was quick to note a target of 500 youths in a sector that is an ocean of opportunities is quite small, and there’s an even bigger need to train more disadvantaged and unemployed youth for the growing construction sector.