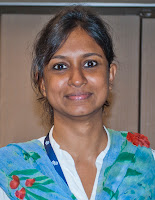 Rama Shyam, PhD, is co-founder and director of the Society for Awareness, Harmony, and Equal Rights (SAHER) in Mumbai, India. A 2007 YouthActionNet® Fellow, Rama was honored on June 21 with the Martti Ahtisaari Peacebuilder Award, presented by IYF bi-annually to a young leader who has demonstrated outstanding leadership in the field of peacemaking and/or peacebuilding.

“I feel more at peace with myself,” said 20-year-old Toral at the end of a group discussion I recently facilitated involving youth from various religious, caste, gender, socio-economic, and educational backgrounds. Belonging to a Hindu family, Toral was often told “to beware, Muslims are dangerous.” Her discomfort with such advice, and desire to know more about this ‘other’ community, drove her to seek out SAHER’s office located in a Muslim ghetto. After hearing other Hindu and Muslim youth tell their stories and connect on a deep level, Toral found herself sharing her own fears and strengths. In the space of two hours, the room full of strangers she had entered was transformed into a familiar space where all felt welcome.

This is what we call building bridges. SAHER creates safe spaces through which youth connect. As they share their personal stories, peace becomes a possibility that transcends mere promises.

SAHER’s emphasis on storytelling can be traced to its roots as a community youth group. As young people, we witnessed conflict in the form of communal riots. Today, we are surrounded by two prominent ghettoes—one Muslim, the other Hindu—that became segregated settlements after the infamous Bombay riots of 1992-93. An otherwise interdependent community suddenly became two boxed-in communities that continue to perceive one another negatively, harboring mistrust and deep-rooted prejudices that are transferred from one generation to the next in the form of assumptions, stories of hatred, and stereotypes.

A young man recently acted with surprise when I refered to Hindus living in a ghetto. “I was brought up with the notion that only Muslims who are socio-economically backward live in ghettoes,” he remarked. Since most youth residing in such communities shape their thoughts around stories they’ve been exposed to since childhood, we use exactly those stories to deconstruct their self concept and their views of others.

Our approach involves taking youth on a journey where they work in diverse groups to discover themselves and the societal influences that contribute to who they are – individually and collectively. Sessions on identifying personal values and stereotypes, understanding power structures (in the form of class, caste, gender, religion, access to information and resources), and managing conflict help youth to develop multi-faceted perspectives of the issues that impact them and society.

Beyond this focus on individual youth, we recognize that peacebuilding demands conversations at multiple levels and needs to include not only young people but adults, community leaders, policy makers, and social systems. Success over the long-term requires larger-scale systems change that addresses everything from electoral processes to how the media reports on events to how businesses invest their resources.

Underlying our approach is the notion of our fundamental interconnectedness. This is stressed through exposing youth to rural and urban contexts and facilitating interactions among peers from diverse backgrounds. Toral’s self-discovery, for example, was made possible through a diverse group process that lies at the heart of all our interventions. We believe that creating such spaces will foster a new generation of young adults who perceive conflict from the position of facilitator, and who enable people to connect and overcome difficulties through fostering meaningful conversations and relationships.