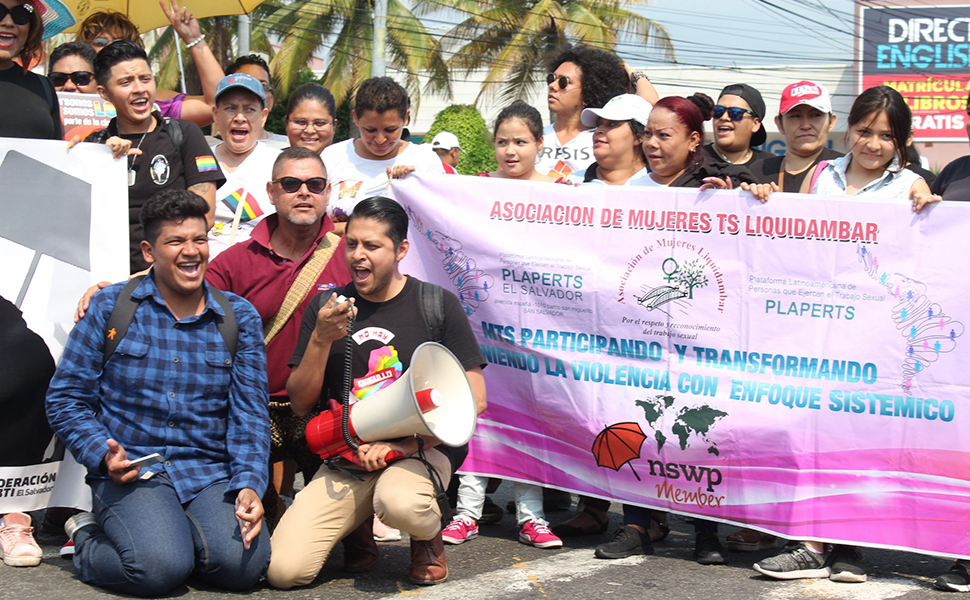 Roberto Zapata, 31, is an LGBTI human rights activist and the leader of AMATE El Salvador. Zapata explains, “Amate means ‘love yourself,' but amate also refers to a tree that grows in Central America”—a symbol of strength rooted to the region. At the recent SID-Washington Annual Conference, Zapata was honored as a runner-up for the prestigious 2019 Rice Award which recognizes the leadership and innovation of young professionals in international development.

Susan Reichle, IYF’s President & CEO, served on the Rice Award Selection Committee. “I was overwhelmed by the number of truly outstanding young people that are doing amazing work across the globe,” Reichle said. “All of them deserve recognition. Roberto’s organization, AMATE, is doing critical work in El Salvador—it inspires me to see the dedication, innovation, and courage of young change-makers like Roberto and his colleagues.”

Below, Zapata discusses advancing the human rights agenda, the importance of education, and why the Rice Award honorable mention is so significant.

What challenges does your organization address, what approach do you take, and why?

There’s still a lot of prejudice towards LGBTI people in El Salvador. AMATE has been around for four years and focuses on the economic, social, and cultural rights of LGBTI people in El Salvador. We’re an LGBTI organization, but we take an intersectional approach to social movements. Historically, it has been the case in El Salvador that different social movements—for example, movements focusing on sexual orientation, gender, or class—have been working separately, even though they face many common struggles. We’re trying to bring these sectors and organizations together because that’s how we’ll move the agenda of human rights forward.

What’s involved in uniting the LGBTI movement with the other movements you mention?

For us, it involves educating our allies from other sectors—for example, women’s organizations and worker’s unions—about what the LGBTI movement has done. And, we also learn more about what they’ve done, too. This highlights that we have more things in common that we have differences. We can respect what each other has done, then build on it together. We also conduct research on LGBTI issues like labor exclusion and labor market discrimination—these issues are not typically covered in universities in El Salvador. Through easy-to-understand papers and workshops, we shed light on these topics and educate other organizations.

What role do young people play in advancing the human rights agenda?

In terms of gender identity and sexual orientation issues, young people often have more empathy and open minds towards these topics, and some of them turn into policy makers. Often, organizations might offer workshops for young people—and that’s important—but it’s not the only way youth should be engaged. At AMATE, when we meet a young LGBTI person, we open the door and invite them into our organization. We want them to play an active part in creating something new. We are a young organization—at 31, I’m one of the oldest members.

Describe your vision for the future of the LGBTI movement.

I’d love for the LGBTI movement to get involved in other struggles—for example, to raise the minimum wage or to engage with the ecological crisis that we’re all living in. Right now, we’re focused specifically on LGBTI issues—and that’s certainly important. But it’s also important for society to see that LGBTI people and organizations care about, and can contribute to, other areas. Building strong intersectional movements is what we need to do to create a better society for everyone.

Why is receiving honorable mention for the 2019 Rice Award significant?

It recognizes the importance of unity and solidarity among oppressed groups of society such as women, workers, youth, and LGBTI. In the face of a reactionary conservatism that is growing internationally with an agenda of hate, discrimination, and exclusion for the many and privilege for the few, it's important for young activists like me to see that the sector of international development is open to take on the challenge of promoting bold and progressive projects.

Learn more about SID-Washington, the Rice Award, and the work being done by Roberto and his team at AMATE El Salvador.