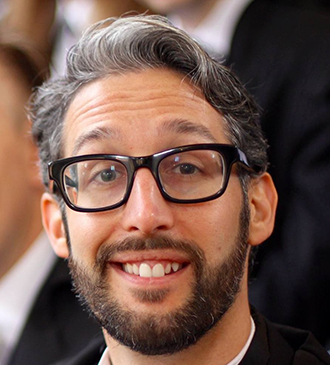 Frank Fredericks is the founder of World Faith, a global nonprofit working to end religious violence, and Mean Communications, a digital agency for social good.  After graduating from NYU, Frank worked in the music industry, managing artists such as Lady Gaga.  As an active writer, Frank has contributed to the Huffington Post, Washington Post, and Sojourners.

Frank is an active writer, contributing on issues ranging from business, technology, religion, and music, and is a frequent contributor to the Huffington Post's Religion section. Frank has spoken around the world, at the United Nations, the US State Department, and has been interviewed on Good Morning America, NPR, New York Magazine, and many others. He is an alumnus of the IFYC Germanacos Fellowship, YouthActionNet® Fellowship, The AMENDS Fellowship at Stanford University, Ariane de Rothschild Fellowship at Cambridge and Cornell Universities, NXT-GEN Fellow at The HOW Institute, and the Soliya Network Fellowship. Frank has been recognized as a Global Shaper by the World Economic Forum, and attended Oxford University’s Said Business School as one of two awardees with a full-ride through the Global Shaper Community Scholarship.

Frank resides in Astoria, Queens, in New York City with his wife and son, fervently reading, cooking, and playing guitar.